The Turia Park, the history of the largest park in Valencia

It is the most well-know park in Valencia and should certainly not be missed during your trip to this great city. The park is no less than 9 kilometers long and is perfect for walking or cycling. It is both popular for local and visitors and we completely understand why.

History of the Turia Park

Jardines del Túria has not always been such a beautiful park. This was once a river that was called under the same name. It has a rich history with a sad event. On October 14, 1957, something terrible happened. The river flooded and killing more than 60 people. This should never happen again, so measures had to be taken. The river was diverted and the riverbed along the city was drained.

But what would happen to this drained riverbed?

Various ideas came in. It would perhaps become a highway to create a quicker access for the trucks going to the port without disturbing the normal traffic of the city. Fortunately, the residents fought hard for this and this plan was not implemented. The residents wanted greenery in the city and protested for this. Happily this worked and the project was abandoned for some years.

Once Spain recovered democracy in 1975, the municipality of Valencia decided to turn the empty riverbed into a park and the first parts were officially opened in 1986.

There was a competition of ideas with several architects and landscape designers. All projects were exhibited for the Valencians to vote for the design they wanted for the gardens. But all projects were almost equally voted, so the municipality decided to divide the riverbed into different sections and give each of it to a different designer.

There are sports fields, fountains, trees and flowers, terraces and, of course, the beautiful architecture for which the park is perhaps best known. It is, therefore, a great park to walk through, but it is even better to cycle through it. The park is perfect for that because it has two cycle paths on both sides of the park.

To do in the park

Turia Park is an important meeting place for many Valencians. Some people come here to have a picnic, walk their dog, play with their kids, exercise and especially run. Valencia is considered to be the city of running. Guess why?. Yes, the turia gardens are responsible of that. Having a totally-flat gardens crossing the city from East to West make it easier for the local to go running. There is a specially designed 5km long running track with a slightly flexible surface to be gentle with the knees runners.

As mentioned, the Turia Park is divided into different areas. The park finishes next to the Mediterranean sea, with the famous buildings designed by the World-reputed architect Santiago Calatrava. This area looks beautiful. Even if you are not a fan of architecture, this is a must-see place. You can take great photos of this state-of-the-art never-seen-before buildings that gives you the impression of having landed in another planet 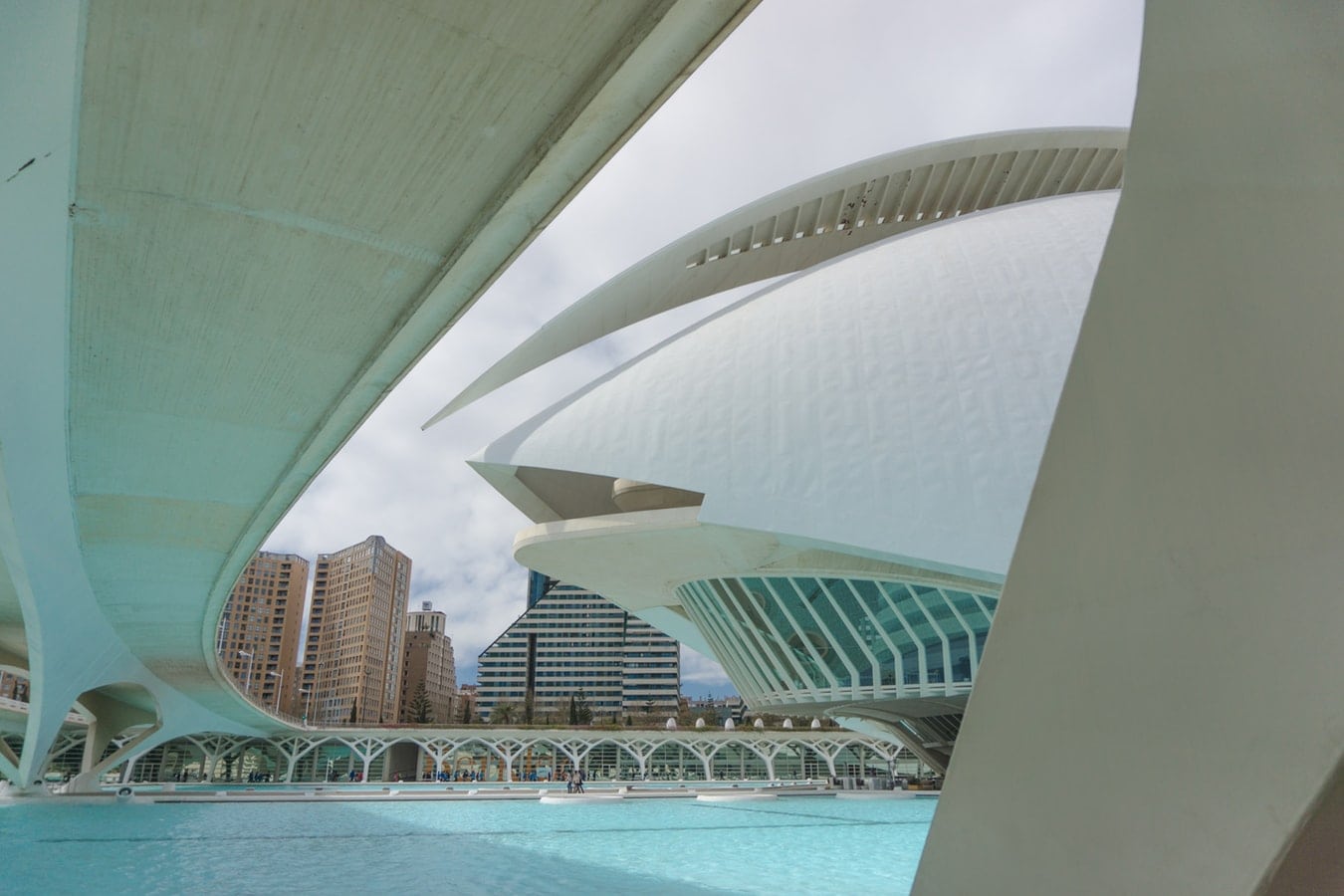 A little further into the park, you’ll find the Gulliver children’s play area. Here is the giant that you may know from the Gulliver story. In this story, gnomes climb over a big giant and tie him up. This has been recreated and the ropes with which the giant is “tied” are slides and climbing frames for the children to climb on. This is a great place not only for children but for adults that want to feel like a kid, enjoying huge slides and being part of theirs childhood tales. Continuing along the park, you arrive at Palau de la Musica. Another beautiful building in the park. It has a fountain that is surrounded by palm trees, which gives an nice cooling effect to this part of the park.

And a bit further West, before reaching Alameda Bridge, one of the several bridges designed by architect Santiago Calatrava for the city, you will find a green-free area which will make you wonder why. You know that Valencia has a kind of passion for fireworks, so we needed a specific place where to organize the fireworks without damaging the trees. This area is also used for various events throughout the year such as gastronomic festival, amusement rides, folkloric events and many more.

If you go even further through the park, you will come across more great areas. Here you will find mainly beautiful trees and flowers, nice fountains, playgrounds and terraces. At the very end of the park, you will find the Bioparc, an animal park representing different ecosystems of Africa in a very nice way. Animals live in semi-freedom in cage-free huge areas where they can feel like at home. It’s a very nice way to get to know about their lives and get a conscience about the ecosystems where they live.

The last part of the park, on the west of the city, is definitely recommended. Just before the end, you will find a large lake here where you can rent a pedaling boat and have lots of fun.

Want to know more about Turia Park? Book a bike tour at Valencia Bikes and we will be happy to explain everything to you about this fantastic, green part of Valencia.

For those who prefer to enjoy it on their own, you can rent a bike in any of the 3 shops that Valencia Bikes has strategically situated in the city; one in the old city next to the cathedral (calle Tapineria, 14), another in vibrant Ruzafa neighborhood (calle Cuba, 24) or shop located next to the Turia Gardens in Paseo de la Pechina, 32.